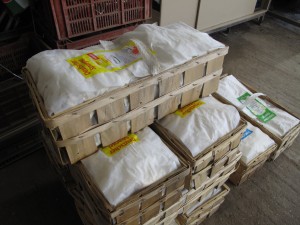 One of the best things about being commissioned to make films is meeting great people with fascinating businesses in interesting places. We were delighted to hot foot it to the fields of a leading farming family in southern Germany for the height of their asparagus harvest. Yes, Green Shoots were asked to shoot green shoots!

Germans prefer their asparagus white. We watched the teams of workers work the ridges carefully selecting the very best of the just-ready spears shooting their way up through the fine soil.

We followed it to be trimmed, washed and carefully packed in birch baskets topped with crushed ice for wholesale to the regional market for connoisseur customers.

It’s often the detail that delights the target audiences of the films we make. However when filming we need to focus on more than farming facts and processes, fascinating though they may be. For a film to engage the audience, make them feel comfortable in the company of the film’s characters and draw them in to watch and listen carefully, it has to convey a warmth. 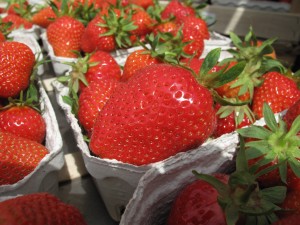 Coping with light on location

Not that it was all that warm on the day of the shoot on the Zapf family farm! An overcast sky prevented the sun’s rays from reaching us but the upside of that is always that there is less glare to cope with and the colours of the fabulous strawberries and the pale asparagus contrasted beautifully with leaves and soil.

Unearthing the essence of the story

The real flavour of the shoot (aside from the delicate white asparagus and fragrant lush strawberries which, yes, we did have to sample while we were there) was the dedication and determination of the father and son farming team producing the finest of crops. 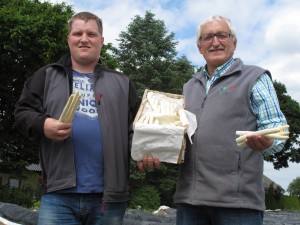 They want to try new approaches and inputs, including a new fertiliser mined in the UK, and are generous enough to want to share the results with others, not just in Germany but in other parts of the world as well. We had to discover what drives them to do and be different.

We worked to get the expression on their faces as well as in their voices and for them to share their thoughts and experiences with the audience, not just give answers to us and our questions. That’s only possible if they relax with us and the camera.

That only happens if we show genuine interest in their life and work, that we prove we are there to help them tell their story and prove with every word and action that they are not merely participants in performing for our storyboard. 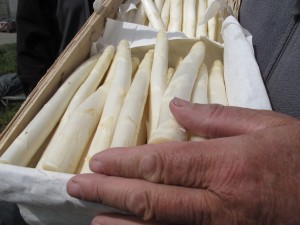 Showing the asparagus is grown with care

Delivering more than the client expects

Our client commissioned a film. We like to find ways to deliver more than expected. So a few days after the final film was approved and we got a request for some high quality images for an international presentation we had a range of crop and character shots that we’d taken on the shoot as well to share with them.

The result is a film that the farmers are delighted with and so is the commissioning client.