UK farmer Charles Bracey shares some of the things that amaze him during the Green Shoots agri-tour of Kenya. 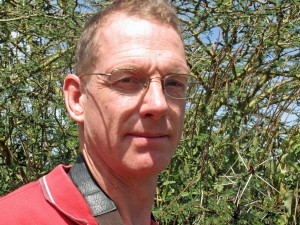 The beautiful story of perfect biological control of pests in action

“Once upon a time a rose grower in Kenya had a small pest. The pest was a spider mite and so small it can only be seen using a magnifying glass. 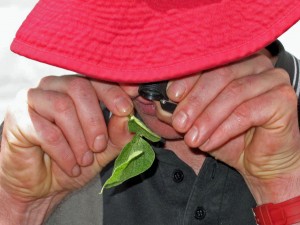 Charles Bracey looks at pest and predator on a leaf through a magnifying glass.

It was eating the leaves of his roses which made the roses small and could even kill them. The rose grower spoke to a very clever lady who knew about a predator whose favourite thing for dinner was the small mites eating the rose bushes. The clever lady bred and caught millions of predators on special plants.

She put the predators in little tubes and sent them to the rose grower, who sprinkled them over the roses. If you look through a magnifying glass at a rose leaf you can see the special preadators running round, stopping whenever it finds a spider mite and eating it all up. The predators get fatter and fatter. 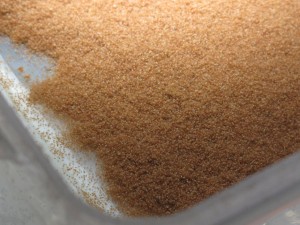 Eventually all the mites on the roses had been eaten but they were now covered in creepy crawly predators. The grower could not sell the roses with all those on them! But this was not really a problem because when all the mites have been eaten, a predator looks nearly as tasty as a mite to another fat hungry predator. So the predators then eat up each other, until there’s just one very fatone left. He finds a nice leaf in the sun and thought he would have a rest, he laid down and fell into a very deep sleep, turned over and, because he was so fat, rolled over and over until he fell off the leaf. The rose grower could now sell his nice and perfect, big roses.”

“When I left England it is winter. It’s so cold water turns to ice, the sun does not rise until 8.00 and it is dark again by 4.00. In the summer in England it is hot and it is light for over eighteen hours a day. In Kenya I find is is as warm as a perfect summer day in England. The sun rise at 6.00 in the morning and sets at 6.00 in the evening. And pretty much every day throughout the year on the equator in Kenya it is just the same. To me, this is perfect weather because I love wearing shorts, and in Kenya I could wear shorts every day. Also, because I am a farmer I like to see rain sometimes. The part of Kenya I was in has more rain than there is at home in England. So with the sunshine and the rainfall nearly anything will grow at any time in Kenya. It is beautiful.”