Up and Away: first Green Shoots sky shoot of the season

Film making can sometimes be about capturing that moment. But for some of our productions, the film is about the months in a business. It was great on a fine March morning to get out and about (with ground cameras) and up and away (with our drone) on the first shoot of the season for our latest farm business film for Strutt and Parker Farms. 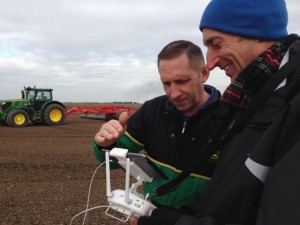 It’s good to give a glimpse of the view to the people that are in our viewfinder as we film. On a commission that will take us several months to film its important to us that those we work with understand and like what we are doing. They are not just in the film, they are helping us to make it. Sharing what we aiming for and discussing it carefully often results in good ideas for us to follow up on. It usually means me we get forgiven for the inevitable delays and distractions that we cause as we persist until we get all the shots.

Farming is no simple matter. There is so much to it. We choose our shots carefully to get the main themes to the fore, and use all the rest of the screen to layer in more content so that there is detail in the ‘mid’ ground and the background too. A human brain is fabulously equipped to be able to process visual content and we want to feed it with our filming.

For us, making films is a partnership. We work carefully with our clients to get the brief – the main message(s), the target audience(s) and the content and schedule – that will make the film a success.At the end of the day, or the end of the process, it’s our aim that when the first cut or draft of the production gets to the client they feel it’s the film they imagined.

And then they start talking about the next production…